An important concept when it comes to .NET Core is Application Portability, in short where and how we are able to distribute and run our applications.

To illustrate the difference between these two let’s start creating a “multiple projects solution” to use with Visual Studio Code:

This file will be used by the dotnet utility to work on all the projects of the solution.

To compile and publish the application you can issue:

This is the default type of application and it essentially means that to be able to run it you need to have .NET Core installed on the machine.

A portable application is a .dll file that can be launched using the dotnet tool.

You can check my previous post Journey to the .NET Core - Frameworks, TFM and Dependencies to have some detailed information on the project.json file format.

Look at the dependecies section: any dependency marked with the property "type":"platform" will not be included in your publish folder, as .NET Core tooling will assume that the runtime (or any other marked library) will be already installed in the system and globally available.

You can only have one dependency marked with the "type":"platform" attribute.

It’s important to launch ‘dotnet restore’ every time we change the dependencies in the project.json file to let NuGet download and install any missing package, otherwise the build could fail.

If you build and publish the application and then look at the files that are generated you will see something like this: 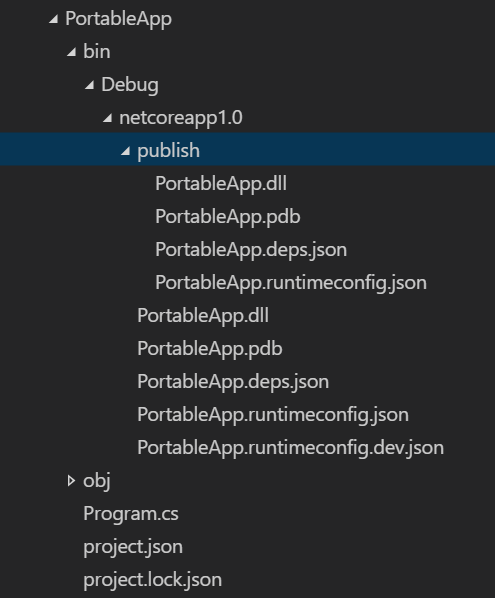 None of the files included in the referenced package Microsoft.NETCore.App are present, they are all part of the .NET Core library and are supposed to be generally available on the target machine.

Once the application is built and published you can deploy that to any machine that has the .NET Core framework installed and execute it using this command from the console:

In this kind of application everything, including the runtime, is packaged together; this means you will be able to run it on any machine that runs an OS compatible with the one you used to build the application itself.

You’ll need to make it explicit which platforms you’re going to build the application for.

Switch over to the “SelfContainedApp” folder project; to create a Self Contained application you need to:

Here’s a modified project.json file that will produce a Self Contained Application for a Windows 10 and for a Linux Ubuntu machines:

If you now issue the commands:

It will compile a version of the application that is compatible with the system you are using. To build and publish a specific platform you need to specify which RID to build with the –runtime switch:

Chosing one application type over the other will impact how you distribute the application.

At its core deploying the application consists in just copying the files in the ‘publish’ folder to the target machines.

Portable applications will require the target machines (or containers) to have the .NET Core framework already installed, so you need to configure them or use preconfigured images for those machines. Self Contained applications do not require that, because they carry everything over with them, but they need to run on the very specific OS there compiled for.

There’s of course a difference in the size of the applications and you’ll need to consider if that can impact your distribution transport strategy.